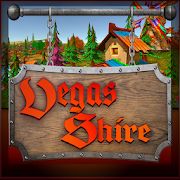 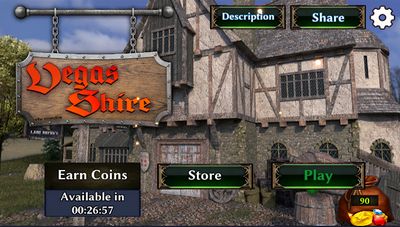 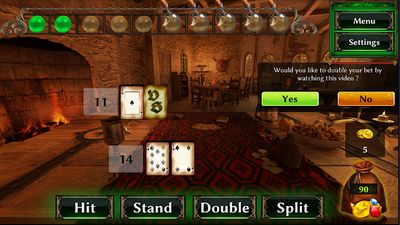 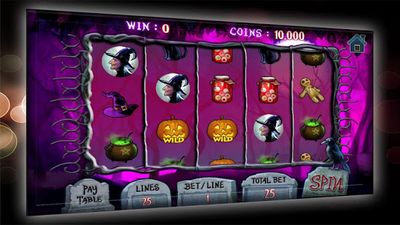 Vegas Shire, a village nestled in a land of fierce battles, simple living and country majesty. But apart from its rugged terrain, there were refined games for the noblemen and village folk alike. Games full of excitement and chance. Games that could change a peasant into a prince, in the blink of eye. Vegas Shire brings to life that experience of playing an exciting card game- Blackjack. Legends in the area tell a tale of a wanderer name John, who went by the name Jack. He was rumored to always carry a stack of small parchments with letters and numbers written on them. He wagered with the village people using his parchment for meals, weapons, silver, and gold.

One day Jack began wagering with Thomas Vick Johnson, owner of the only Tavern in Vegas Shire. It was rumored Jack beat Vick Johnson with his parchment game, frequently. So much so, that Vick Johnson owed Jack a very heavy sum of gold. The debt owed to Jack became an embarrassment to Vick Johnson. The towns’ people mocked the Tavern owner. But Jack never reminded Vick Johnson of his debt.

Soon after that time, Jack disappeared. He was never seen again. One of his parchments was found behind the old Tavern. It was Jack’s favorite. The one with the single Black Spade.

Now you can experience the same game that made Black Spade Jack or Black Jack, as the name took- famous in the village of Vegas Shire.

Play Vegas Shire! Wage or squander your booty as you please! You may never know what surprises are in store for the most daring adventurers. Make Vegas Shire- Your Shire!

Lay down your sword, and accept the civilized challenge of beating your opponent without being bloodied. Every deal, one winner- one loser. Playing Blackjack will bring reward or take your shillings. But ultimately, you’ll stay a peasant or become a prince!

Winner of each round must be as close to, or equal to 21 (when that player’s cards are added) without going over.

Aces can be worth 1 or 11, your choice to better your opponent. But be careful not to exceed 21.

Face cards (King, Queen, Jack) are worth 10. All other cards are worth their stated value.

Combined they need to add up to 21.

Hit” will give the player another card, while “stand” will stop anymore cards to be dealt.

Split” will allow two hands in a round where two same cards are dealt.

Watch your betting, some tables are set at higher levels, and are not for the faint at heart.